Creating the Next Generation Scientists

When Taylor Thompson was in fourth grade, several monumental things occurred in her life. In September she received her first pair heels to wear to church and other special occasions. In December, she was given a birthstone ring, just what she wanted. On her 10th birthday, for one day only, she was allowed to wear lip-gloss, no color just neutral gloss, and she could apply it however many times she wished, after school.

But it was at the end of her fourth grade year that the most amazing thing happened. During the awards assembly in June she received the Leadership award from her teacher. The award symbolized her “…tireless effort to take make a positive difference by providing leadership and direction in class events and activities”. She had never seen herself as a leader. That was something adults did. But there it was embossed on a plaque, next to her name: the word leader.

The words “make a positive difference” stuck with her and over the next few years. And soon Taylor began to think more seriously about leadership and how important it was for young people to develop leadership skills. She realized that young people were soon going to be called upon to lead a more diverse, conflicted and rapidly changing world. That summer she was selected to attend the Junior National Young Leadership Congress in Washington D.C. along with middle school students from around the country. It was a transformative event that changed how she saw herself and other young people’s leadership ability.

Since then Taylor has continued her efforts to develop leaders among the ranks of young people. Along the way she attended a number of leadership and academic camps – two summers at Northwestern University, a summer at Andover Phillips Academy, a summer at Stanford University, and Summer at Brown University. Along the way she began to see how young people from across the country and around the world were talking about the normal teen age things, but also were discussing world issues and attempting to make sense of where society was heading. The students had great ideas about heat could be done, but no one was listening.

Taylor’s international travel has taken her many places throughout North America, Central America and Europe. As she has traveled, studied and worked in each of those international destinations, she has found the same teen aged ” inquisitors of life” seeking to find solutions to problems in the world. Her recent work with the Model U.N. took her to New York to meet and talk with teens from around the period who were just like her: young leaders trying to change the world by addressing global issues that had far reaching impacts.

Taylor knew the time was right and young people were ready to step up and take the lead. So, in 2012 she established the Taylor Wilson Thompson Family Foundation dedicated to assisting young people at the middle and high school levels to become engaged in leadership activities. Unlike many other leadership forums, this one would be for young people, developed by a young person.

Through the Taylor Wilson Thompson Family Foundation, she has sponsored leadership activities that have impacted nearly 1500 young people around the country. Her goal is simple – to help develop the next wave of leaders who are ready and willing to change the world in a positive way. 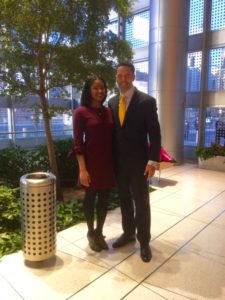 Steve Pemberton is a nationally known author of “A Chance In The World” and a highly recognized youth advocate. As a corporate executive. he has been an industry leader in developing collaborative methodologies and outreach that brings people together and unites them around common problem solving. He is one of Taylor’s mentors and has worked with her to help develop foundation strategies. 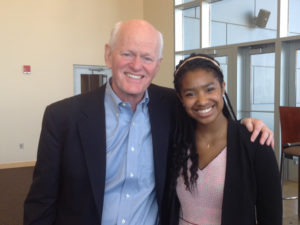 Marshall Goldsmith is the number one rated coaching guru in the world by “Global Gurus” and is the author or editor of more than 35 books, including “What Got You Here Won’t Get You There”. He has also been named one of the top 50 thinkers and business leaders who have impacted the field of management. Marshall is one of Taylor’s mentors and has invited her to present with him at his events.